On an annual basis, your monthly TPP pension payment may increase as a result of a cost-of-living adjustment (COLA) each July 1st.

The TPP has 2 types of COLA, Variable and CPI -1%. Your retirement date determines which type of COLA you could receive. These details are below.

Variable COLA is based on the Plan’s funded status at year end December 31 of the previous year. 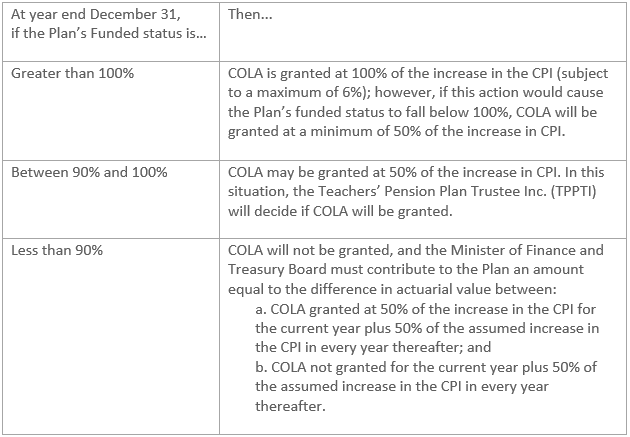 While the Plan’s investment performance was positive at year end 2021, the Plan’s funded status remains less than 90%, at 82.5%. Therefore, retirees and beneficiaries eligible for a Variable Cost-of-Living Adjustment will not receive an increase in their pension in 2022.

Download a pdf. version of the 2022 Variable COLA notification here:

If you retired before August 1, 2006, COLA can be granted when the increase in the CPI is greater than 1%.

Your TPP Cost-of-Living Adjustment amount was calculated as follows:

Download a pdf. version of the 2022 CPI-1% COLA notification here

What is the Consumer Price Index (CPI)?

CPI is an indicator of changes in consumer prices experienced by Canadians. It is obtained by comparing, over time, the cost of a fixed basket of goods and services purchased by consumers. It is published monthly by Statistics Canada. Changes in the CPI are the most common measure of inflation.

For more information on the CPI, please visit the Statistics Canada website at www.statcan.gc.ca